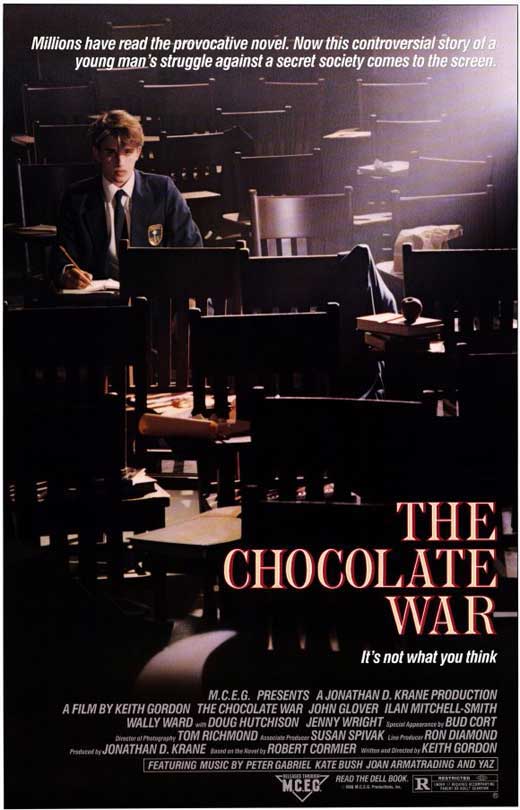 The Chocolate War is one of my two all time favorite pieces of literature. (The other being Inherit The Wind) Now that I re-read it recently, I figured it’s time to write a post explaining how much this book means to me.

The main storyline of the book revolves around high school freshmen Jerry Renault. It’s sometime in the 1980’s and he goes to a private Catholic school. Jerry has just experienced his mother passing away from cancer, and his father moved him out of their house and into an apartment because they couldn’t deal with the memories of her around every corner.

Jerry is a skinny kid but wants to be a football star someday, so he’s trying out for the team and pushing himself to succeed there.

Archie Costello is the antagonist, although there’s a handful of moments from his point of view. Archie acts as a ringleader in a gang in the school called the Vigils. The Vigils act as a “control” in the school – an underground organization that bullies kids into doing prank-like “assignments.” Archie is the one who creates the assignments and uses psychological warfare to make his victims carry out their tasks.

The conflict (and title of the book) arises when Archie assigns Jerry the task of refusing to sell Chocolates for 10 days in the annual school chocolate sale. Not wanting to be bullied, Jerry accepts the assignment but then continues to deny the Chocolate sale after his assignment is up. This causes other students to rebel against the sale, while unbeknownst to them the acting headmaster is counting on the sale to save the school and his own reputation.

Jerry Renault represents very accurately who I was when I was his age – 15. Jerry lived through his mother’s passing from cancer, I lived through my father’s passing from cancer at that age as well. Jerry was just starting to come into his sexuality, and I was just starting to understand mine at that point. Although Jerry went after girls, whereas I did not. Jerry starts with a poster in his locker that reads, “Do I dare disturb the universe?” Back when I was 15, I was so trapped in my own universe and had no concept of the real one outside my window. After I turned 18, I slowly began to disturb the universe, and move around in it, much like Jerry ends up doing over the course of the book.

I found myself relating to Jerry at my original reading of the book, but didn’t see just how similar he and I were at the time.

“The exhilaration of the moment vanished and he sought it in vain, like seeing ecstasy’s memory after jacking off and only encountering shame and guilt.”

Archie is more complicated. Whereas Jerry is a freshman, Archie is a senior, and closer to 18. Archie has a much more adult mentality.

“Archie believed in always doing the smart thing. Not the thing you ached to to, not the impulsive act, but the thing that would pay off later. That’s why he was the assigner. That’s why the Vigils depended on him.”

Archie strikingly reminded me of Draco Malfoy the first time I read the book, and he still does to this day. Archie is a true Slytherin type – resourceful with a disregard for the rules. Archie is also a puppet master, able to adapt any chaos thrown at him and control everyone and everything around him. The 15-year-old Lukas saw him as a villain, but the present Lukas sees where that kind of personality is truly a life skill to have. While Archie is obviously not a Harry Potter character, he’s a Slytherin I relate to in present day. Many times throughout the book he feels the controlling thought of “I am Archie, I cannot fail.” Another one of Archie’s lessons, from the sequel, Beyond The Chocolate War:

“The point is nobody’s perfect. There’s always a flaw. A secret. Something rotten. Everybody has something to cover up. The nice man next door is probably a child molester. The choir singer a rapist. Look at all the unsolved murders. Which means the man standing in line next to you could be a murderer. Nobody’s innocent.”

Much of Milo Yiannopulous reminds me of Archie, which is probably a subconscious reason why I’m so drawn to Milo as a person/speaker. Archie also strongly reminds me of Kai Hiwatari, an anime character I idolized during my high school and early college years. Archie has a lot of lone wolf characteristics in him; to quote from the sequel Beyond The Chocolate War:

“No response, no echo. Which is what he wanted; to be alone, separate from the others, untouchable except by the knowing hands and mouths of the girls at Miss Jerome’s.”

“Archie realized anew why he kept himself distant from people. Let them approach a bit and they come too close, take too many liberties.”

“It was good to have people hate you – it kept you sharp.”

And Archie’s thoughts from the sequel, Beyond the Chocolate War:

“Everybody likes the smell of his own shit.”

Archie pulls some thoughts out of the mentality from another book I enjoy, Lord Of The Flies. He speaks the following to the leader of the Vigils, Carter:

“You see Carter, people are two things: greedy and cruel. So we have a perfect setup here. The greed part – a kid pays a buck for a chance to win a hundred. Plus fifty boxes of chocolates. The cruel part – watching two guys hitting each other, maybe hurting each other, while they’re safe in the bleachers. That’s why it works Carter, because we’re all bastards.”

This mentality plagued the characters of Lord Of The Files as well. I was still very much an innocent little kid when I first read this in 8th grade, but I’ve definitely seen too much of the world to deny this thought on my own now. I’ve seen the overwhelming greed and cruelty from far too many people at this point, it really makes you lose faith in your fellow human. I’d even add to this: distracted. While people watching at the airport during the holiday season in 2016, I saw the vast majority of people only looking at their phones, or so wrapped up in their moments that they were leaving bags unattended, or dropping things and just walking away. Every day I see people fail to read documents agreeing to financial transactions that they don’t bother to even look at. People give their credit cards over the internet to criminals and scams that they don’t even realize are fake. I’ve seen people kill & hurt over their greed and desire for drugs. Forensic Files, Numb3rs, and other crime shows reveal so much about the negative side of the human psyche.

The 2016 election (and it’s consequences) has been a great example of so many people devoting their lives to their political beliefs, wearing them on their shoulders, having a self-righteous attitude about them, but then refusing to act when it comes time to vote, or work gracefully with others when their team has lost. (I used to be that person once upon a time.) In particular, the UC Berkeley riots over Milo were gut-wrenching to read about.

I have seen so much that people complain about problems in the world, but are doing absolutely nothing to change them. Too many have come to believe that sharing a picture on Facebook will feed a starving person, fill up a blood donation bank, get someone trapped in an abusive relationship to safety, get someone off their drug addiction, and so much more. If you want to see good things happen in the world, you have to go out and do good. You really do have to be the change you wish to see in the world.

Humanity has good moments, but as life continues these moments get increasingly rare. I have a harder time each passing year believing that people will do the right thing.

“Carter disguised his disgust. Archie repelled him in many ways but most of all by the way he made everybody feel dirty, contaminated, polluted. As if there were no goodness at all in this world. And yet, Carter had to admit that he was looking forward to the fight, that he himself had bought not one, but two tickets.”

Even Jerry realized what Archie’s mentality does when it infects people:

“A new sickness invaded Jerry, the sickness of what he has become, another animal, another beast, another violent person in a violent world, inflicting damage, not disturbing the world but damaging it. He had allowed Archie to do this to him.”

Jerry has started his journey in the book with a poster in his locker that had the phrase, “Do I dare disturb the universe?” Jerry ponders this before deciding to take his refuse the chocolates assignment further than he was supposed to, thus going against the Vigils gang and disturbing the universe that is Trinity School.

Other characters’ views of the world are ripped apart by Archie and Brother Leon, the teacher who is the grown-up version of Archie. From the mind of another student, who was just blackmailed by the acting headmaster:

“And he did see-that life was rotten, that there were no heroes, really, and that you couldn’t trust anybody, not even yourself.”

I do like to hope though, that I don’t make people feel dirty, contaminated, & polluted. Archie falls into the evil side of the spectrum because he uses this outlook on life to inflict harm onto others. For me, I take this worldview and use it as a way to find compassion for others. We all have our sins to bear, our battles to fight, or opponents to defeat. I have a dim view of humanity these days, and it makes those who are kind, loving, and warm all the more special.

Another bully at the school, Emile Janza has a moment where he describes his view of people & life:

Emile is one of the more true villains in the story. He inflicts brutal beatings on other kids, and is the physical torment to compliment Archie’s psychological torment to others in the school. Emile is the kid I was always scared to run into when I was young, and still fear to an extent even now.

Another thought Jerry has about the universe and the people within it (about his father in this particular example):

“Listening to his father’s snores, he thought of how his father was actually sleeping his life away, sleeping even when he was awake, not really alive…..What was it the guy on the common had said the other day?….You’re missing a lot of things in the world.”

This strongly sums up how I feel much of this world is, even more so today than I did when I first read it. Jerry sees that his father is worse than just grieving over the loss of his wife/Jerry’s mother, but going so far as to have become an empty shell in life. Part of what makes me a UU is to listen to the life stories of others and hear them talk about their dreams, their hopes, their passions. I’ve met people who, like Jerry’s father is portrayed in Jerry’s mind, have no passion. They are walking through lives as an empty shell. They have no desire, no energy.

Harry Potter teaches us to pity those who are incapable of love (i.e. Voldemort’s of the world), The Chocolate War shows that it’s also the people with no souls & passions for life that need to be loved and cared for as well.

The Chocolate War resonates with me just as strongly now as it did back in 2001. Many of the life views it shows are ones I’ve been carrying with me for some time now, and will continue to do so.