I picked up this book because Hilton Hotels have been wonderful to me. From employment to my travel adventures, it’s been a life changing experience. So the next logical step (to me) was to hear the story of the “RuPaul” of hotels. After all, even TIME Magazine called him the Innkeeper to the World:

Conrad Hilton (or “Connie” as he was more commonly known by during his lifetime) is quite a man. Given the time period in which he was growing up and active, I was surprised to see how much of him I can relate to.

Connie was born on Christmas Day, 1887 in rural New Mexico. He was the son of a Norwegian immigrant father, and a devoutly catholic mother. Before starting his Hilton Hotels chain, he had his hand in many different industries and jobs. He operated a general store, ran for and served as a political representative, and was seriously interested in owning a bank when he stumbled into hotels quite by accident.

“There was a vastness here, more air, more sun, more space, and I thought that here a man drew some of that vastness into his soul He could dream big dreams, think big thoughts because there was nothing to hem him in.”

The above quote is from when he was beginning to expand his business contacts, still running the store with his father. He is talking about the vastness of Texas and New Mexico at the end of the 1800’s.

This is almost literally what I felt Vermont was when I first moved there, and what I expect Texas will be like in 2018. A new frontier gives a person room to breathe, room to dream. This is one of Connie’s recurring themes – the power to dream. He was always dreaming, thinking of the next big thing for himself. Before hotels, his greatest dream was a bank. Once he realized that hotels were his “thing” the Waldorf Astoria in New York was his “mountaintop” dream. He repeatedly referred to the Waldorf as his “queen.” 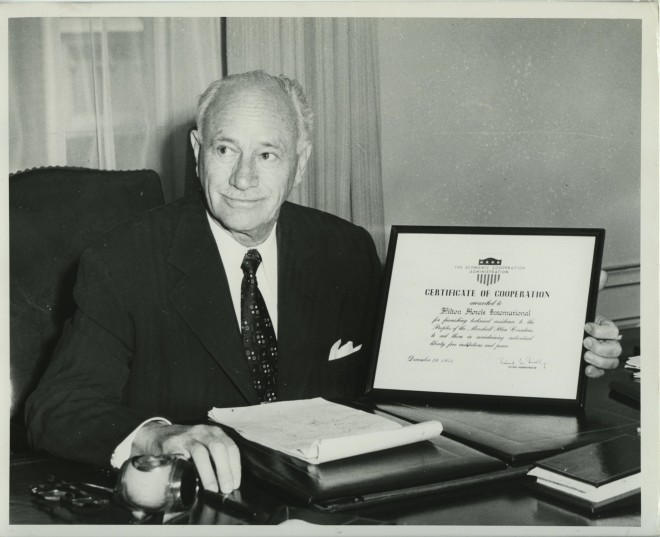 “Now bargaining was – and is – a very personal thing with a great deal of tradition behind it. You have to know the rules. But if you do, and have a zest for it a good bargaining bout between well matched opponets can be as exciting as a major leauge ball game. The trick is to know the value of an article to learn to regard a price tag so that it is flexible – not of course, staples like salt or coffee, but on such items as feathed hats or coffins. The buyer is entitled to a bargain. The seller entitled to a profit. So there is a fine margin in between where the “price is right.” I have found this to be true to this day whether dealing in paper hats, winter underwear, or hotels.”

Hilton was an expert businessman, no doubt about it. It’s these little nuggets of wisdom that really show how he thought. It’s knowledge like this that you only really get by going out into the world and digging your hands into it.

Bargaining in particular is a skill that I never acquired as a child, nor even really understood until very recently. A former roommate of mine relied on it heavily, so I first started seeing it in action in 2014. Hilton’s insight on the topic is superb.

“After feeding and tying the mules I’d put on bacon and coffee, the two most comforting smells I know, and huddle over the campfire.”

Anyone who knows me knows how important coffee and bacon is to me. Glad to see Hilton felt the same way. Connie goes on to mention the traditional importance of drinking a cup of coffee with someone in Turkey, and what a different world we would live in if that tradition was shared in America and worldwide.

Hilton had moved to Texas towards the beginning of his quest for expansion and growth. He was in Cisco, TX looking to purchase a bank in 1919 when the deal fell through. As the deal was failing, he found a 40-room hotel called the Mobley (which still stands today) and he purchased it when he couldn’t get a room for the evening. The Mobley Hotel was doing so much business that it was turning over every room three times per day, the dining area had been converted into extra rooms, and Hilton was sleeping in his office.

“It was a paradox. I was home, yet it wasn’t home. I was the same man, but changed. I had gained a vision of a wide, wide world beyond my native river, my native state. My former dreams bound up in past limitations.”

After spending time in Vermont and being so far away from everything I knew, this is also the frame of mind I felt about my then-new state. Hilton’s quote here is the heart of why I think it’s good for everyone to leave the place they were born at some point while they are young and go out and see the world. It really changes your perspective and deepens you.

(Conrad’s Mother) “You’ll have to find your own frontier, Connie” When I hesitated she added, “A friend of your father’s; a great pioneer, once said, ‘If you want to launch big ships, you have to go where the water is deep.'”

Connie’s mother, Mary Laufersweiler Hilton was a driving influence in his life. Throughout the entire book he references how her Catholic beliefs shaped his own faith, and she really helped drive him forward.

No wonder Hilton College is in Texas! Seriously though – it wasn’t until after he transitioned to Texas that he began to to accomplish his major life goals.

On esprit de corps: “Pride plus incentive. Wages won’t do the whole job. We had to sell the idea that our men belonged to the best durn outfit in the A.E.F. and they were the ones who made it that way.”…”Self interest plus pride added up to increased efficiency and we simply blossomed with esprit de corps.”

This right here is the Heart Of Hilton. Hilton prides itself as being a great place to work, and there’s sound reasoning behind that. It was a vision of Hilton himself to give every single one of his employees a reason to believe in the company they were working for. This started with the very first Hilton Hotel, the Mobley in 1919. I personally make it a point to be proud of my job, no matter where I am, and I feel like Hilton is the first company to back that idea from their side. This is a beautiful sentiment that I think more companies should adopt. Furthermore, Forbes has consistently put Hilton on the list of 100 Best Places To Work.

Hilton is the first company that I’ve ever had the idea to want to one day say “I gave 30+ years of my life to that company.” These days, people jump ship for various reasons, always thinking the grass is greener somewhere else. Hilton showed his employees that it won’t be true because they will make the company they believe in the best of all.

“I thought I was about the luckiest fellow there was. Funny, I think so still. I do believe in luck. But the kinds I believe in has to do with people, and being in the right place at the right time, and receptive to new ideas.

All of this right here. I believe in these words; luck has little to do with universal “magic” per se, but rather understanding how people function, what people need, and what drives them. Hilton went to great lengths to understand other people, be it during business dealings or romantic pursuits. Understanding people and their needs is a cornerstone of any service, and Hilton shows that throughout his book. 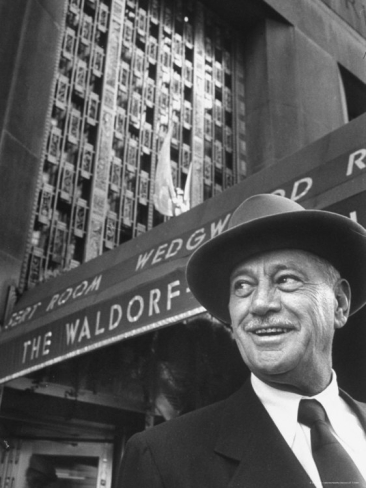 “I think maybe the fact went to my head a little. I think maybe I was verging on complacent self-satisfaction and I do not know of any single thing that will halt a business career so rapidly. A further facet of my “luck” has always been that, when I was riding a little too high, something or someone dragged me back to earth again.”

“I realize now that there has never been a war without casualties, never a true victory, for something treasured has been lost on both sides.”

Even Kai once said that “we should never rest on our laurels.” This is one more pillar that Hilton understood, and learned from. It’s too easy to get comfortable and get knocked down. I have gone through many a breakthrough myself. Loss and defeat helps to make us stronger as people and as professionals, and the great depression provided that life lesson to Hilton. He lost nearly all of the hotels he had acquired at that point, and had to fight his way to holding onto the rest.

“As I believe in my own faith, as I believe in America, so I honestly believe that brotherhood is the platform on which a lasting peace must be built – in business, in a nation, in the world at large.”

Hilton believed in other people. These words may have been written back in 1957, but they ring true today. America is a wonderful country, and we only got to be so great by the brotherhoods (and sisterhoods) that we’ve formed amongst ourselves. Recently America has felt divided, and it’s very disheartening. I make it a personal point to place myself in everyone else’s shoes and my own faith involves listening to and empathizing with others.

Conrad Hilton lays out his blueprint for hotel success right in his book in pretty explicit detail. His seven point plan can be summarized as follows:

“I believe that idealism can be practical, as I explained. ‘I work for our stockholders,’ I said. ‘I am in business to make money for them. All right, here’s the way I see it as a hotel man. The world is shrinking. What used to be a month-long vacation trip is now almost a week-end possibility. Businessmen can cover far-off territories. The airplane is here to stay. Americans not only can but want to travel farther, see more, do more, in less time. This is progress and the hotel business must progress right with it…Today you can fly over a whole string in a few hours. If we were to set our hotels a day’s journey apart, we’d be around the world in no time. So perfectly sound business is in line with national idealism.”

Hilton’s vision outlined about to his board of directors back in the 1950’s sounds very much like today’s world. It’s within this vision that I can personally see 1/5th of the whole country in just a few months. Hilton saw his hotels as an integral part of the American dream, and even references that they stand as an argument against communism, which was much more of a threat in the 1950’s when the book was written.

Thank you, Conrad Hilton, for this amazing journey through your life. I’ve been your guest, and now I’m inviting everyone I know to #BeMyGuest!